Just as earth has cycles which we call seasons, the sun's energy output also changes on
a roughly 11-year basis. We call these changes the solar cycle.
We are now entering Solar Cycle 25. During the last solar minimum, there were few
magnetic storms on the sun, sunspots were rare, and geomagnetic disturbances here on earth
were nearly nonexistent. Aurora watchers had to travel to the polar regions to see
the Northern Lights.


2021 marks the beginning of a new solar cycle, number 25. The sunspot numbers data below was updated 01 July 2022. As of this date
we have had zero days with no sunspots on our Sun.

Solar Cycle 25 is shaping up to be stronger than expected. New sunspot counts confirm that the young solar cycle is outperforming official
forecasts, with the rate of geomagnetic "storm days" nearly tripling in the past 12 months. See the data and learn more at Spaceweather.com.

EARTH'S SHIFTING MAGNETIC FIELD: Earth's magnetic field is changing so quickly that researchers have been forced to
update to the World Magnetic Model ahead of schedule. Developed by NOAA and the British Geological Survey, the
model is widely used for precision navigation of devices ranging from nuclear submarines to the common smartphone. Your
own phone may be affected. 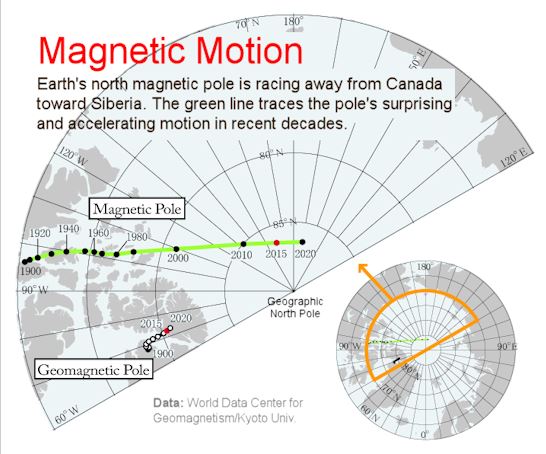 Above: Earth's magnetic north pole has been accelerating away from Arctic Canada since 1900.
Graphic courtesy of Kyoto University.

"Pick up your cell phone and look at it. That rectangular marvel of modern technology contains thousands of lines
of code. Among them is the World Magnetic Model (WMM)ï¿½a program that helps your phone navigate. And it's in a bit
of trouble. Researchers have announced that the WMM needs an emergency update because Earth's magnetic field is changing."
"Savvy backcountry hikers have long known that compass needles don't really point north. The magnetic north pole is
displaced hundreds of miles from the true north pole and, to make matters worse, it wanders unpredictably from
year to year. To find true north in the continental USA, you have to correct compass directions by as much as
20 degrees using a special "declination table." The World Magnetic Model is a computer program
that makes this correction for you. It improves the navigation of devices ranging from nuclear submarines to
common smartphones.

""The WMM is the standard magnetic model used for navigation by organizations such as NATO, the Ministry of Defence,
and the US Department of Defense, and also by smartphone operating systems such as Android and iOS," explains Will
Brown of the British Geological Survey's Geomagnetism Team, which produces the model in collaboration with NOAA of the USA."
The rest of this story may be found at Spaceweather.

Solar Cycle 24 was disappointing to those of us who hoped for strong geomagnetic
storms to spark auroral displays. Satellite operators, however, were grateful that this maximum period
was weak. So what can happen during a strong solar maximum? Sunspots increase and harbor more energy.
At times, this energy is released in the form of coronal mass ejections (CMEs). A CME
consists of plasma from the sun itself -- electrons and protons -- with an accompanying
magnetic field. When these charged particles strike the earth's magnetosphere, they travel
down the magnetic field lines to the poles, colliding with atoms in our atmosphere along the way. These
collisions can create a display of the aurora borealis. The energized ejected material can also strike satellites,
causing drag and damage to electronic circuitry. GPS units and telecommunications may be disrupted.
In a severe geomagnetic storm, astronauts and high-altitude jet passengers can receive
higher than normal doses of radiation. Power grids on earth may fail as a result of the massive
influx of energy. The aurora borealis can sometimes be seen as far south as Mexico.
For an excellent article on the possible effects of a severe geomagnetic storm, see
this page on Wikipedia.

Earth dodged a huge magnetic bullet from the sun on July 23, 2012. A Carrington-class flare erupted on the far side of the sun.
According to researchers from UC Berkeley and China, a rapid succession of coronal mass ejections — the most intense eruptions
on the sun — sent a pulse of magnetized plasma barreling into space and through Earth’s orbit. Had the eruption come nine days earlier,
when the ignition spot on the solar surface was aimed at Earth, it would have hit the planet, potentially wreaking havoc with the electrical
grid, disabling satellites and GPS, and disrupting our increasingly electronic lives.

A modern Carrington event would cause significant damage to our high-tech society.

From the NASA article: "Just before dawn the next day, skies all over planet Earth erupted in red, green, and purple
auroras so brilliant that newspapers could be read as easily as in daylight. Indeed, stunning auroras pulsated even at
near tropical latitudes over Cuba, the Bahamas, Jamaica, El Salvador, and Hawaii.

What is the likelihood of another Carrington-type event occurring in modern times? The University of Birmingham
used Extreme Value Theory to estimate the timeline. Their best answer is ~100 years. We are overdue.

Could extreme space weather have led to the development of life on our planet? According to a recent study
published in the journal Nature Geoscience, it is possible:
"If a massive solar storm struck the Earth today, it could wipe out our technology and hurl us back to the dark ages.
Lucky for us, events like this are quite rare. But four billion years ago, extreme space weather was probably the norm.
And rather than bringing the apocalypse, it might have kickstarted life." Full story may be found here.

As our climate changes and warms from the norm, there has been a lot of speculation on whether the Sun
and its cycles play a role in Earthly climate matters. Some climate change deniers claim that this solar maximum's low activity
will lead to a cooling planet, thus offsetting man-made atmospheric carbon input. Is this plausible? The science says no:

"As supplier of almost all the energy in Earth's climate, the sun has a strong influence on climate. A comparison of sun and climate over the past 1150 years
found temperatures closely match solar activity (Usoskin 2005). However, after 1975, temperatures rose while solar activity showed little to no
long-term trend. This led the study to conclude, "...during these last 30 years the solar total irradiance, solar UV irradiance and cosmic ray
flux has not shown any significant secular trend, so that at least this most recent warming episode must have another source."

In fact, a number of independent measurements of solar activity indicate the sun has shown a slight cooling trend since 1960, over the same period
that global temperatures have been warming. Over the last 35 years of global warming, sun and climate have been moving in opposite directions. An
analysis of solar trends concluded that the sun has actually contributed a slight cooling influence in recent decades (Lockwood 2008)." 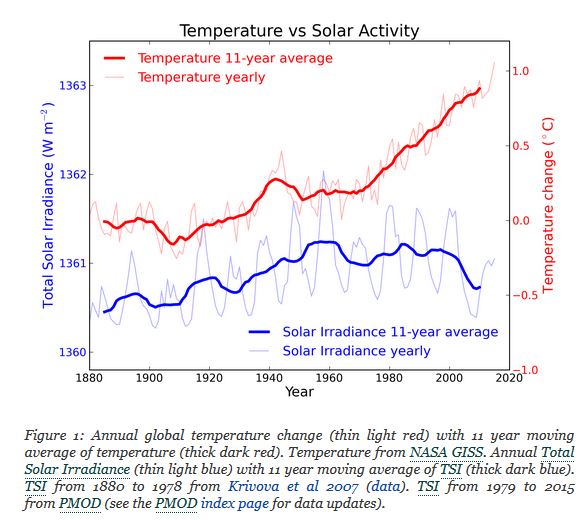 In recent years, the belief that the sun may flare and cause an electromagnetic
pulse (EMP) on earth has been popularized in the media. Is this possible? No. According to NASA's
C. Alex Young, a solar astrophysicist with NASA's Goddard Space Flight Center, "[Killer flares] would not happen.
The sun cannot produce flares (or CMEs) with enough energy to do this. It is a physical impossibility.
It would take the entire energy of the sun, like a supernova. The sun will not become a supernova.

Speaking of odd beliefs, HAARP is not a sinister government plot.
Instead, it is a scientific program funded by U.S. taxpayers "to analyze the ionosphere and investigate the potential
for developing ionospheric enhancement technology for radio communications and surveillance." You may read more about HAARP here.

For incoming storm warnings or to find out if you can see the aurora in your area, see:

SOLAR HAM has great information, graphs, video and live feed that is updated
every two minutes.
My own aurora borealis site also lists sources for space weather updates and solar storm warning notifications.
Tools are included to let you calculate whether the aurora is currently visible in your location. I have also
included links to aurora web cams on this page. Please note that the aurora is not visible in arctic
skies from May through late August due to the length of daylight hours.

Photo below courtesy of Andy Keen, and The Aurora Huntersï¿½ on Facebook. 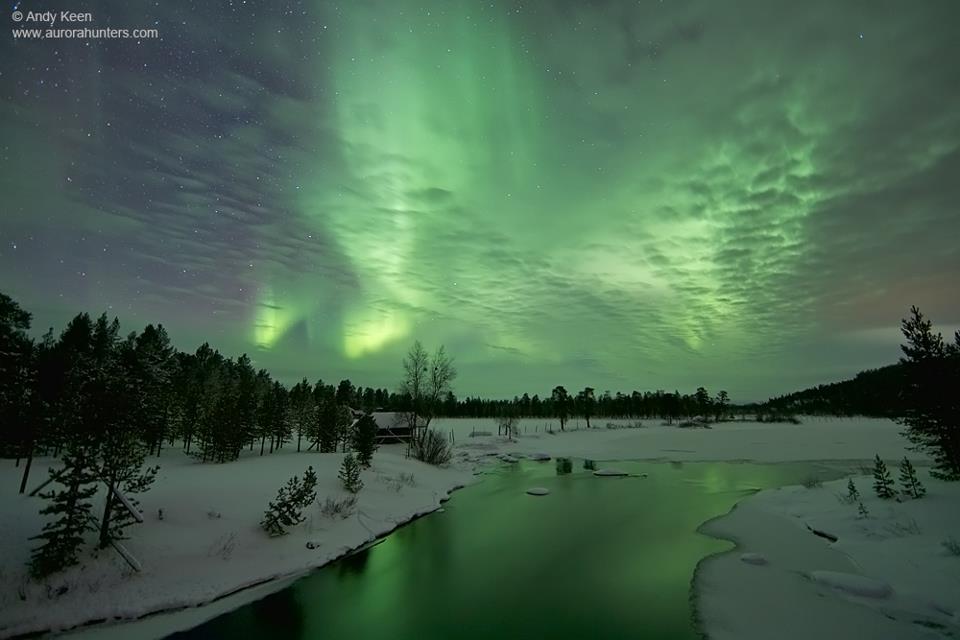 Would you like to see and photograph the aurora live? Please visit:
Andy Keen's site, The Aurora Huntersï¿½

If you are interested in purchasing fine art prints of the aurora as seen in Norway, aurora photographer Frank Olsen's
outstanding work may be found in his art gallery. 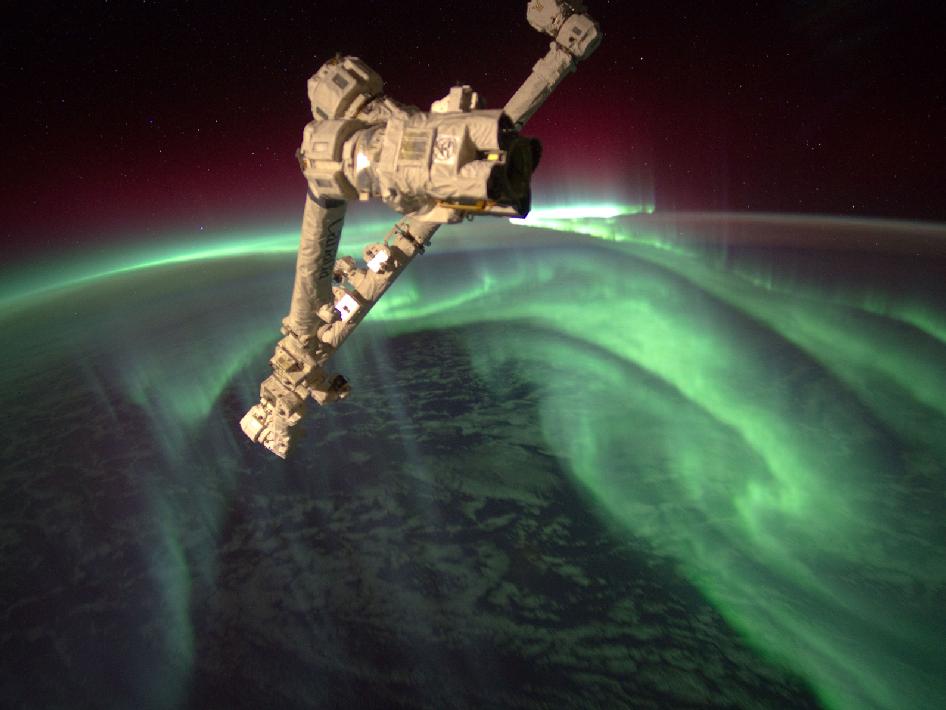 (Above) ISS032-E-007896 (15 July 2012) --- The Expedition 32 crew onboard the International Space Station, flying at an altitude of
approximately 240 miles, recorded a series of images of Aurora Australis, also known as the Southern Lights, on July 15 (2012).
NASA astronaut Joe Acaba, flight engineer, recorded the series of images from the Tranquility node.
The Canadarm2 robot arm is in the foreground.

Below: A beautiful video of the Aurora Australis, from TimeStorm:

Disclaimer: The information contained on this page has been verified by the author. Every effort has been made to ensure accuracy.
If you find any incorrect information, please feel free to notify me at the email address below.

I dedicate this page to my dad and mom, who gifted to me the love of life, nature, science, and
most of all - curiosity and the never-ending thirst to satisfy it. Thanks. I love you.

You are free to quote or link to this site. However, it is
my preference that it not be used to attempt to prove political or spiritual points. Scientific knowledge
belongs to us all and has no national or political borders. Thank you.